A downloadable game for Windows, macOS, and Linux 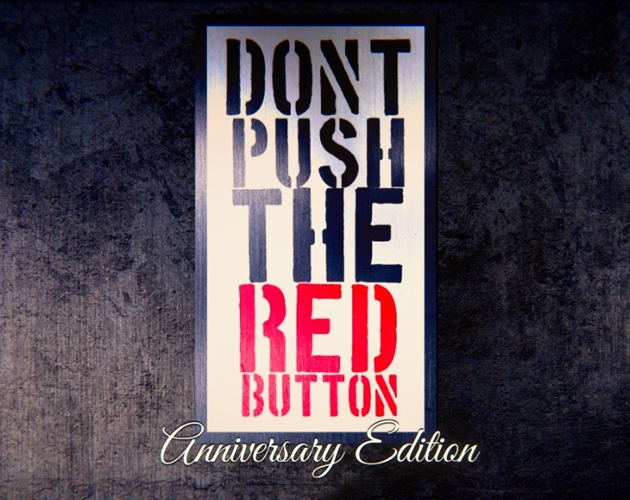 NEW ANNIVERSARY EDITION
Actual Beta Feedback:
"I feel personally attacked by this game."
"THERES JUST A LOT GOING ON HERE. OMG ITS GROWING"
"This game was agony but in a good way. 10/10"

After one year of button pushing, Cercle Games is proud to present: Don't Push The Red Button: Anniversary Edition!

New in the Anniversary Edition:
Optimized Code!
New never-before-seen Content/Time Events!
Online Leaderboard - Compete to not push the button longer than anyone else!
Gamepad Support!
Linux Build!
Added/Fixed Languages including Korean. (By request of Markiplier.)

And a specially made VR version for use with the Vive or Oculus Rift!

email us at cerclegamesinfo@gmail.com and ask us about our digestive health

I RESISTED THE RED MENACE AND WON THIS LITTLE GAME IT DID NOT GET MEEEE....forrr 30 minutes i loved this experience from the music to the things that happen in the game! I would recommend playing this! Also heres my playthrough!

I press the button to fast but wh

I didn't do very well...it was too alluring.

To me, it is another desert bus kind of a game. Challenge inducing and hilariously silly with absolute no meaning at all. I will try to play for more than 10 hours and see how long can i last. Its funny.

Reply
I wish I was dead1 year ago

i feel so trolled right now...

I played this game and it was really fun! (even though all i did was not press the button for an hour and 15 minutes) Great graphics too! And I like that you gave a special thanks to the player at the end of the credits! ^-^ (side note: I think I did awesome...*sees comment by loveizzlife4ever* Welp.)

So 9 months ago I played this for 6 hours and I only missed 1 star, so I decided to play again today but for 8 hours and I did but I couldn't even press the button because when I turned into the button after one hour or so, I glitched into the floor. Could you fix this problem because I've just trown 8 hours of my life away. Thank You (the updates were funny, I never knew that I wanted to be a button and just run around XD)

I had to push the bottom to play other games!!!

It is extremely easy to cheat at, since the goal is to NOT press the button. You can just play a different game, while leaving this one up and running. Therefore, you should make it so you can't be away for a certain length of time in order to maintain fairness.

A decent game to play in leisure time, but tends to overheat the computer system (or is it just mine?)

Reply
ZEOPLAYS2 years ago
This was easily the best and worst game I have ever played. Good job on that achievement. You met and failed every expectation I had. I'm just wowed...
Reply
DJOnTheComputer2 years ago(-1)

Took a look at this game...Decided to make a pointless 3 minute part of this game on a 3 free game video...Shocked someone kept their game app. opened for soooo long! Well! If you want to check it out. I put mine in part 3 of the video here!

https://www.twitch.tv/curlymichael  HELP ME NOT PUSH THE RED BUTTON relax

July 26th, 2018 will mark one full, amazing, rich, beautiful, glorious, painstakingly long year of people playing a game where they don't push a red button.  As everyone knows, this game has gone down as one of the most important events in human history. The Red Button was nominated for a Pulitzer prize in February, was considered for the MacAuthur Genius Grant, and History courses at Yale and Harvard have started teaching Red Button 101 classes. In fact, UCLA will now offer a prestigious MBA in the Red Button Arts this Fall. My God, what an astounding time to be alive.

The unshaven team at Cercle  has been working day and night and day, furiously typing algorithms into our coffees and downing cup after cup of delicious computer, all in the desperate attempt to complete "Don't Push The Red Button: Anniversary Edition" before the 26th.

But we need your help.

We have been told by our accounting and law team that in order to distribute this experience to the widest audience we need to ask for a certain amount of a newly discovered resource called: "Money."

If we receive enough of this so-called "money," we will be able to get "Don't Push the Red Button: Anniversary Edition" in front of the eyes of the world. And then, everyone, yes, EVERYONE, will know the glory of the red button and will quake in its presence.

TL;DR: I'm asking for money to finish and put Don't Push the Red Button on STEAM.

And anyone who donates will get their name in the credits of the game.

average mind of a 5yr old.

I thought you were actually serious XD.

My arms are longer than existence itself.

I'm proud of you

ok so on the wall on the start with all the other languages you put some hebrew text (probably with google translate) 2 times. one of them was just random letters and the other was a nice try of saying "push the red button" in hebrew. the problem is that you got the grammer all wrong!

so here is the right way to say push the red button in hebrew:

and sinse the other option is that you DID wrote it the correct way but the words flipped, just try to fix it, ok...

Thank you for the heads up! I've had so many people point it out to me since markiplier's video and it is fixed in the newest version which comes out later this month! Sorry about that!

Is the "Itulak ang pulang buton" a Filipino translation? If so, that's great! I got to hear Mark speaking Filipino lol. Can I just request for you to change it into "Pindutin ang pulang pindutan"? It's a more accurate translation. Thanks. It's a nice game btw

You got it! Thank you for your help!

Personally I did not want to press that red button, because there was no finnish language.

I mean come on, we are special enough to get our own "Press the red button."

Even Sweden got one! You can do better than that.

if you give me an accurate translation, I’ll put it on the wall in the anniversary edition. :)

How about just "Paina punaista nappia." Simple but solid, am I right?

Wow! Look at this!

Can you make a Linux edition? :C

the text in hebrew is oppiset and not real words

I had another person tell me recently and it will be fixed in the next version!

It has been over 2 hours and the game isnt over yet, how much longer is this

Reply
The GDWC2 years ago

I'd like to invite you to take part in this year's Game Development World Championship! This is a pretty fun game it's a simple and doesn't take itself seriously, but it's still well made. You actually get some time passed by just reading all the stuff on the walls. My only complaint is that the mouse aim was a bit wonky in the browser version, I had to aim on floor to finally press the button.

Had lots of fun!

can you send me a link to that girl sitting on a blue stool?

Where did you get the soundtrack?

Wrote and sung it myself! :) 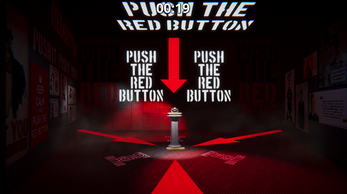 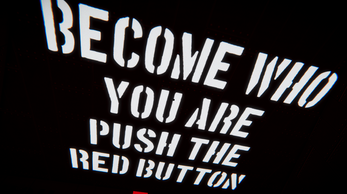 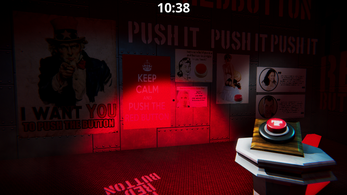